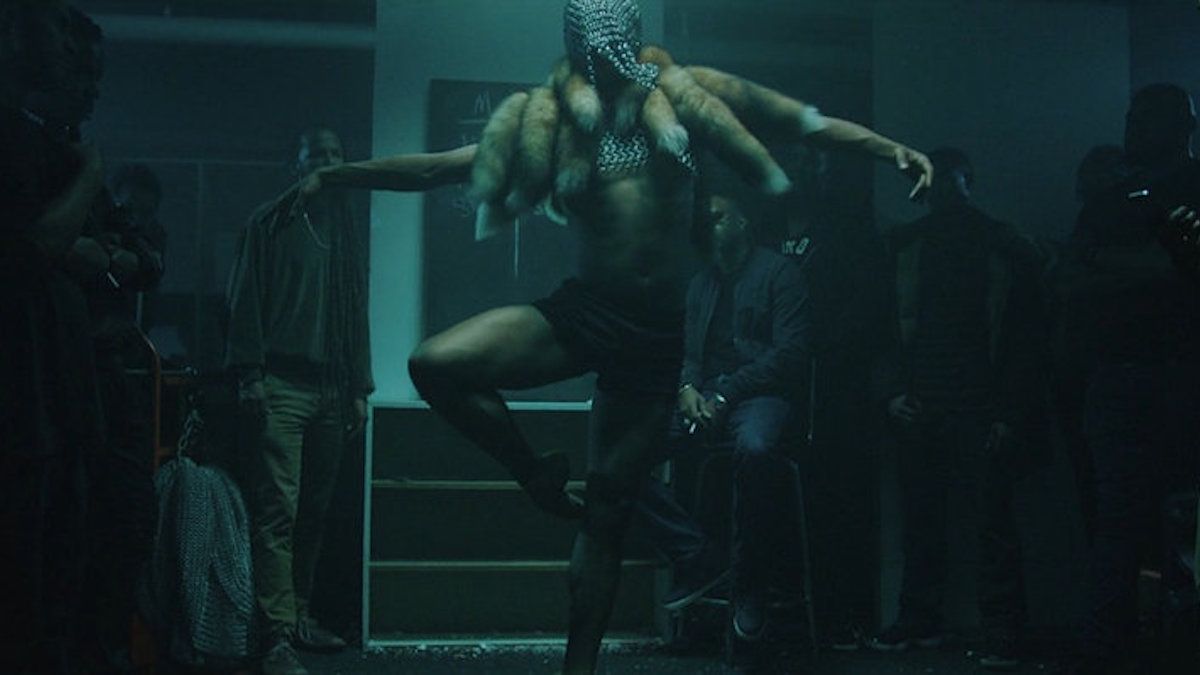 This week is again, heavy with news of the widening social division, rampant racism, judicial injustice and Black Death. For afro-diasporic communities everywhere, this grief is at times carried in vocal ways, at times quiet ways, but is nevertheless constant. But nevertheless, is constantly carried. In this time of heightened tensions and ensuing moral and mental fatigue, the video series Chainmail (1 to 3) by multimedia British artist, Amartey Golding, feels necessary. Inscribed in the revived fight towards racial justice, the works open up and send in flux traditional definitions of Black masculinity.

In all three videos, Black British male characters engage in ritualized performances of physical and mental prowess as fellow kins adorn them with heavy wearable chainmail sculptures of Golding’s devise. The material’s ambiguity: a layer worn for protection from implied conflict and violence, points to the ruptures caused by oppressive behaviours, whether they are caused by others or perpetuated by ourselves. Golding mentions in interview that the making of the chainmail is in itself a meditative mourning process, with his thoughts wired towards all the Black British people who die each year. In each video, the transformative aspect of the performed new rituals, works to mend those wounds.

For instance, Chainmail 2 (2018) draws heavily on the figure of the Black martyr and blurs the fictional with the reality of the community and kinship developed through Golding’s projects. The film stars a friend, met during the Chainmail 1 shoot, Darren Gayle, a self-sacrificing man who experienced homelessness in order to provide for his family.

Casted in dark blue shadows and surrounded by palm leafs, the latter appears as a christ-like figure, carrying the chainmail’s 90 kilos on his emaciated frame. He seems to be slowly pilgriming towards his own grave, towards his own death. People standing alongside his solemn walk insert carnations into his garment, until he collapses under the weight and lays on his “grave”. He is then picked up by two men, carried to revival through these gestures of collective grief, efforts and care.

The same gesture of carrying forth the exhausted body is also present at the end of Chainmail 1 (2016). The film’s tone strikes a fine balance between ambiguous signs: Solomon, Golding’s brother, first crosses a series of rooms that recall a boxing ring, a prison cell and then a gambling house. As he is adorned with increasingly heavy chainmail, he gives a series of stunning ballet performances, to the crowd’s pleasure and amazement, until he collapses from exhaustion. The display of his graceful talent and power over a slowed down version of a now disclaimed dancehall classic with homophobic lyrics, confronts issues of toxic masculine behaviours and creates space for brotherhood devoted of oppressive behaviours. There’s a palatable tension between the subversion of traditional masculinity and the obvious weight of doing so for Solomon.

The video brings to mind the book In Between the World and I by Ta-nehisi Coates in which he speaks of the predominance of fear in Black people’s lives in North-America. The fear of being harmed, rejected, degraded, perceived as a threat, permeates our behaviour and can become a motive of rejection of the parts of the self or others that stray from the accepted norm. Chainmail 1 imagines a community liberated from fear, where men from different generations gather to cheer one another.

In Chainmail 2, the set of the scene reveals itself to be the iconic Palm House at Kew Gardens. Through botanical colonialism, the famous English botanical garden played a prominent role in the expansion of the British empire and claiming ownership and control of “exotic” nature, just as they claimed ownership and control of bodies deemed “exotic”. Existing as a Black person in a country with a colonial “past” means having to deal with this legacy and reclaiming sovereignty.

Golding’s characters invest these loaded spaces and alter them into ones of collective grief and healing, where blackness thrives through rites of adornment and proud perseverance. We shed the weight of our burdens like shedding the skin of old selves, making space for transformed ones that exist outside of social constraint.

Eve Tagny is a Tiohtià:ke/Montreal-based artist. Her practice considers gardens and disrupted landscapes as mutable sites of personal and collective memory — inscribed in dynamics of power, colonial histories and their legacies. Weaving lens-based mediums, installation, text and performance, she explores spiritual and embodied expressions of grief and resiliency, in correlation with nature’s rhythms, cycles and materiality.